Most industries are dominated by monopolies. How we enforce antitrust law explains far more than you might think. 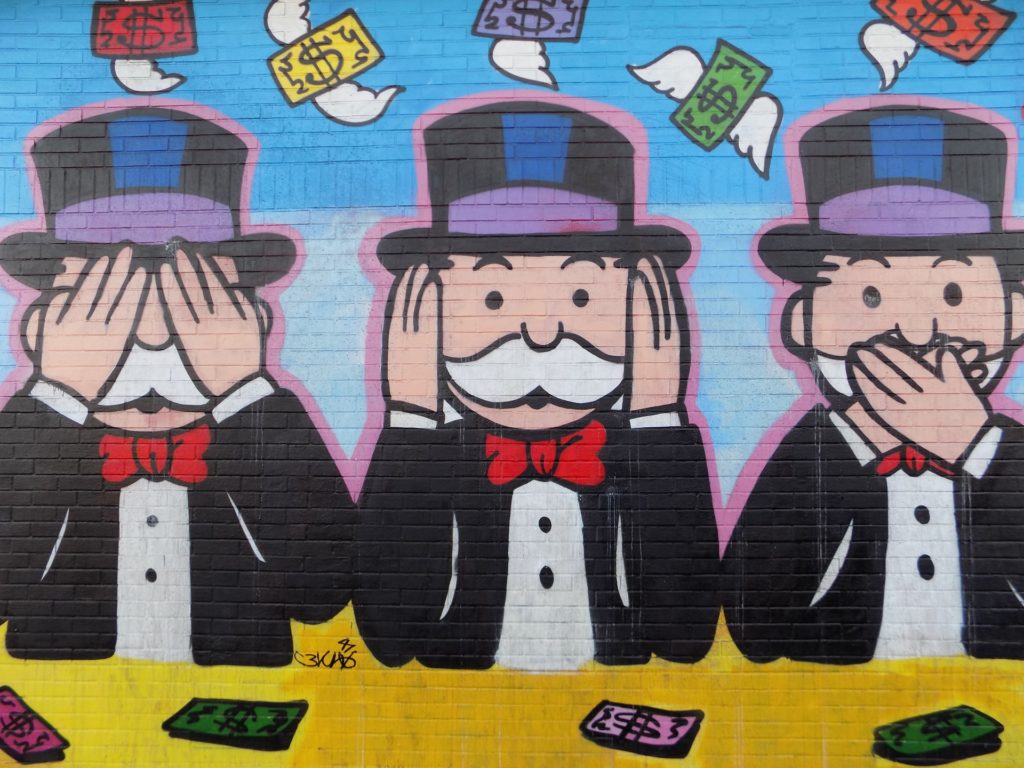 My first monopoly was AT&T.

I lived on a commune until I was eight. We didn’t have toilets, but we did have phones. We didn’t own them. It was a commune, after all. But they were in our house and we got to use them.

When we reentered “normal” civilization, we still didn’t own our phones. AT&T did. This was 1984, the same year Congress broke them up. I was more confused than injured by their power. Capitalism was new to me. Every single thing in our house was ours, for the first time, except that one. We had to lease it from Ma Bell. Even weirder, the lines in our house were apparently not ours. (I mean. We were renters. But you get the idea.) We had to pay to attach other objects to ports in our own house.

This confounded me. “Some… outside company I’ve never heard of makes rules about what we have in our house?” Yes indeed.

Thankfully, it didn’t last. With five siblings, we needed but could not have paid for those extra phones.

My second monopoly was Microsoft.

They had complete dominance of desktop operating systems and software (the Office suite, plus Outlook/Exchange for email). I went to Reed College, so I exited school as a Mac user, in the middle of their dark days. In hopes of avoiding Windows I tried everything else: BeOS, Linux, Solaris, you name it. No matter how fast I ran, I was often stuck on Windows at work because, well, everyone was.

Microsoft abused its monopoly heavily and freely until being taken to court. Microsoft’s abusive behavior is usually discussed in terms of its effect on the web. But I’ll never forgive them for Outlook. It taught multiple generations of people to do email incorrectly. To this day, the average business user is incapable of having sophisticated discussions over email because Outlook trained them not to.

Ironically, Microsoft itself likely only exists because of Congressional antitrust action against IBM. The government eventually withdrew its case against Big Blue, but not before convincing it of the importance of leaving room for others.

The Paradox of Antitrust Choice

Kids coming up today are lucky. They have so many monopolies to choose from.

Of course, I don’t actually mean “choose”. You pretty much have to use all of them. Google for search, Facebook for social, Amazon for e-commerce and cloud infrastructure, and Apple for hardware and apps worth paying for.

Tech is absolutely rife with monopolies. (And monopolists.) But the industry itself is largely in denial about that. “We’re different!”

The last month has highlighted this. Congress has dragged the richest, most powerful tech founders and CEOs in to testify. More importantly, a Judiciary subcommittee has produced a huge report on concentration in the tech industry.

Responses from the tech industry have not been great. Many have laughed at congress members for their lack of tech prowess. Some focus more on what the tech companies haven’t taken over yet than on what they have. Others have claimed that tech is so different they have to be looked at fundamentally differently.

Tech is not special

I’m going to focus on that last link, from Ben Thompson. He makes a throwaway comment:

consumer harm, which is the de facto standard for antitrust in the United States

The article itself is interesting and informative, as most of Ben’s writing is. But this small line shows that Ben is in a box that limits how he thinks about antitrust. And if he can’t see out, few others are likely to.

Abuse of monopolies affects all of us. It’s not just about tech. We’ve allowed most of our industries to become highly concentrated: Agriculture , pharma, internet access, and many more. Heck, even eyeglasses.

Ben works hard to explain that the tech monopolies are natural because of what he calls Aggregation Theory. He implies this makes their monopolies more acceptable, even inevitable. He accepts there is abuse, but a very narrow definition of it. Even if his theory is sound (which I am not convinced of), it doesn’t explain the rest of the monopolies that plague us.

The “consumer welfare” standard is not the law

Ben is right that US antitrust law focuses on consumer welfare. That’s pretty much the work of one person: Robert Bork. His book, The Antitrust Paradox, successfully rewrote the history of American antitrust enforcement. Gone were concerns about competitive markets, or any discussions of the downsides of market power. Nope. If prices are low, it’s good. That’s it.

He didn’t get any new laws passed. He just convinced our country to enforce them differently.

Yes, consumer welfare is an important input in the laws themselves. But there’s far more to it, including a healthy focus on market power. Yet Bork managed to gut everything else with one book. (To be fair, there were a lot of rich and powerful people set who became even more so once he won.)

To be clear: The laws themselves have not changed. Only how we enforce them, within the government and the courts.

It is impossible to understand antitrust enforcement in our country without accepting this fact: We have strong antitrust laws and are choosing not to enforce them. They have been gutted by an extreme interpretation, and fifty years later, nearly every industry demonstrates the ruinous consequences.

Bork successfully reframed the downsides of market power, with a lot of help from the Chicago School of Law. But there have always been people fighting back.

Lena Khan produced the seminal work in this category, Amazon’s Antitrust Paradox. She lays bare how powerful Amazon is, and how useless consumer welfare is as a means of assessing monopoly abuse. Its impact has allowed her to carry the flag even further.

In particular, she was part of the team that ran that Judiciary subcommittee hearing, and produced the related report.

Yes, her argument - and thus at least partly, the argument made by Congress - is that Amazon and its peers have too much power, and they are abusing it to gain even more.

But more importantly, she’s arguing that you cannot have a conversation about market power without also talking about standards other than consumer welfare.

That’s what Ben Thompson (and Ben Evans) and all the other tech commentators need to understand.

The argument is not really whether one of these companies is a monopoly. It’s what standard we should use to assess their behavior.

Do we let Bork decide, and use a light hand and generally tolerate heavy concentration of power?

Or should we follow the original intent of the laws, focusing more on encouraging a competitive landscape and a market free from companies that are too big and too powerful?

Every tech founder I know builds their business around the reality of these monopolies. If you’re in e-commerce, your business is defined by the space Amazon leaves you. You don’t necessarily have to be on Amazon, but prepare to be attacked if you’re not. If you’re in social, you have to ensure Facebook doesn’t want your business. If you make apps, you can only make or sell them the way Apple lets you.

I expect most founders and investors don’t even realize how much we’ve given up on doing because of these monopolies (and all the smaller industry heavyweights, like Salesforce). We talk big about agile startups outwitting the big players, but… that only works if they can’t choke off your suppliers, outbid you for engineers, or take hundreds of millions in losses to destroy your company.

What could we build if we didn’t have to fear so many big players?

I’m still haunted by that AT&T phone we didn’t own.

I could not be happier that the government is finally revisiting our antitrust standards. And honestly, I’d rather they make mistakes in regulating the huge players than not regulate them all. We’ve seen what five decades of almost no action results in.

Like everyone, I love fast cheap shipping. But it’s not worth destroying independent retailers over. Honestly, I can’t stand using any of Facebook’s products, but maybe I could if they were stand-alone instead of part of a soulless corporation bent on domination.

I believe in the free market. But none of the markets I’m interested in are. They’re all dominated by players so large, so powerful, that our only choice is to work with or around them.

It’s long past time to get rid of the consumer welfare standard, and bring back to true antitrust enforcement.